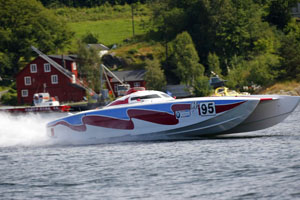 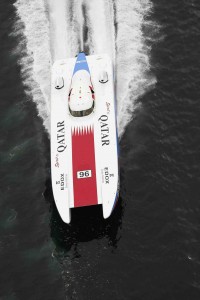 Key West, Fla. (October 16th, 2009) – Super Boat International is proud to announce the participation of the SPIRIT OF QATAR team in this year’s Key West World Championships. The international team, consisting of two boats, will compete in the Catamaran Superboat 750 and 850 classes. This will be the first time that his Excellency Sheikh Hassan bin Jabor Al-Thani and Qatar’s Abdullah Al-Sulaiti will have raced in the United States. Hassan will be teamed with veteran Super Boat throttleman, Steve Curtis. The following is the press release issued by Qatar Marine Sports Federation (QMSF).

The Qatar Team, which runs under the wing of the Qatar Marine Sports Federation (QMSF), withdrew from this season’s UIM-WPPA Class 1 World Championship in protest at some of the official decisions that had been taken in connection with racing infringements, but the QMSF quartet are relishing the opportunity to return to a racing environment in the United States of America and increase their race experience before a possible return to the Class 1 arena in 2010.

“We will race in the (Superboat) 750 and (Superboat) 850 classes,” enthused Sheikh Hassan, who has claimed 20 Class One podium finishes since he joined the world’s premier powerboat series in the middle of the 2003 season. “Both these classes have the same rules and regulations and similar power-to-weight ratios.”

Both Sheikh Hassan and Abdullah Al-Sulaiti will be racing in the USA for the first time, although Curtis has taken part in the Key West race meeting on four occasions and won his championship class twice. Nicolini visited the venue many years ago to manage a customer team, but has never raced in Florida before.

“We have yet to see the final race formats, but I don’t think it will be much different to what we are used to,” added Sheikh Hassan, who will need to leave Florida as soon as the Sunday race is finished to return to Doha for the build-up to the Unlimited Hydroplane racing in Qatar the following weekend.

“I can only speculate that it will be more of a top-end speed course than we have been used to in Class One. Steve (Curtis) has been racing for many years and his experience in the USA and at Key West will be a great asset for us.”

Curtis is relishing the opportunity to represent the Spirit of Qatar Team in Florida with the Skema V12-engined Qatar 96. “We are ideally suited to the Superboat 750 and Superboat 850 classes, although the American boats may be a little lighter than ours. It will be a great chance for us to get back into race mode and also a chance for Sheikh Hassan to spread the word about Class 1 to an American audience. Maybe it will even attract a few American teams to enter Class One in the future.”

Al-Sulaiti and Nicolini will use their Sterling V8-engined Qatar 95 at Key West, where former Class One racer Randy Scism is a regular among the 100 or so competitors and competes in the Superboat Unlimited class. “For me it will be a good experience to compete against other teams and at a new race venue,” enthused Nicolini.

The Key West race week is held under the auspices of Super Boat International Productions and starts with a boat parade and registration at the Race Village, Truman Annex, on November 8th-9th. Testing and official practice will be permitted on Tuesday, November 10th between 09.00hrs and 17.00hrs (local time), before the first race fires into life on Wednesday, November 11th.