Key West, Fla. November 16, 2009 – This past weekend Super Boat International crowned some of the most famous teams in offshore racing. The overall winner and fastest boat of the day was Miss Geico Racing. Winning a championship title is not only about having the fastest boat, but also about strategy and endurance.
Miss Geico, the race winner in the Superboat Turbine class endured a long day of racing without power steering. As the team entered the milling circle prior to the start of the race, the team lost all power steering and knew it would be a battle to turn the boat around the course. As driver, Mark Granet explains,  “it was a lot of work to handle the boat and keep it on track. We just wanted to get around the course and stay in front of the other Super Cats. We had a little trouble in turn three, but we were able to get it around and win our fourth World title.”
Seminole Hard Rock Casino was crowned World Champion in the Superboat Vee Unlimited class and has back to back 2008 and 2009 Triple Crown titles. Teams earn this honor by winning the most points in Florida races; win the National Championship title and World title in the same year. Peter Meyer, Owner of the Unlimited Vee says he never thought it would happen. “For 25 years, I’ve been trying to earn the crown and now, two years in a row, I’ve gotten it.  I can’t believe it. I have a great team. We’ve tested and done the maintenance on the boat and, in the end, it has shown through. I couldn’t be happier.”
The overall sentiment of the 29th running of the world championships in Key West has been the same… it’s the best ever. The Spirit of Qatar 96 team lead by Sheikh Hassan Bin Jabor Al-Thani captured the Superboat 850 Extreme World title. He was surprised by the great welcoming he received from the other racers and fans. “I was a little nervous coming over with our whole crew and two boats, not knowing how we would be received. Everyone has been so nice. The other racers have introduced themselves to us and were very interested in our boats and racing style. They’ve shown us great hospitality making us feel good for our first trip here. I have done a few boat parades in the past, but nothing like the boats parked on Duval Street the other night. That was the best fan turnout I have ever seen. There seemed to be a party every night and it has just been a great week.” After the first day of conservative and strategic racing, Hassan led his team to victory with an average race speed of 102.91 miles per hour.
Another very happy competitor is owner/driver Billy Mauff, of WHM Motorsports, winner of the Superboat Unlimited class. Mauff says, “there are a lot of first time happenings this week. The Sheik came here with two boats which hasn’t happened for many years. There were more good Cat participants, the waters were different each day and everyone had a chance to win. Our class had a different winner each day and, I guess, it was my day to win. At the end of the day, everyone is a winner. This is my 6th World Title here in Key West and there’s no other place to have a world Championship but here. If you looked along the sea wall and saw all the crowds (I bet 50,000 people on Duval Street the other night) you would see this is the World Championship place.”
First time World Champion winner in the Superboat Vee Extreme class, owner/driver Mike Janssen of Saratoga Stampede, comments he’s happy to pull it off the first time out. “We prepared a lot over the year and I got some great help from the best such as champion Johnny Tomlinson. The fruits of our labor have really paid off.”
The efforts put forth in the marketing and planning for this marquee event of the year was evident by the crowds and international competitors attending this year’s Key West Championship. Super Boat International owner, John Carbonell, agrees with the racers that it has been one of the best years here. “We had a lot of big boats and international boats this year and, I believe, it was an all around great week. It looked like we had near record crowds watching the race and attending the events on Duval Street. It just finished off a very good season.” 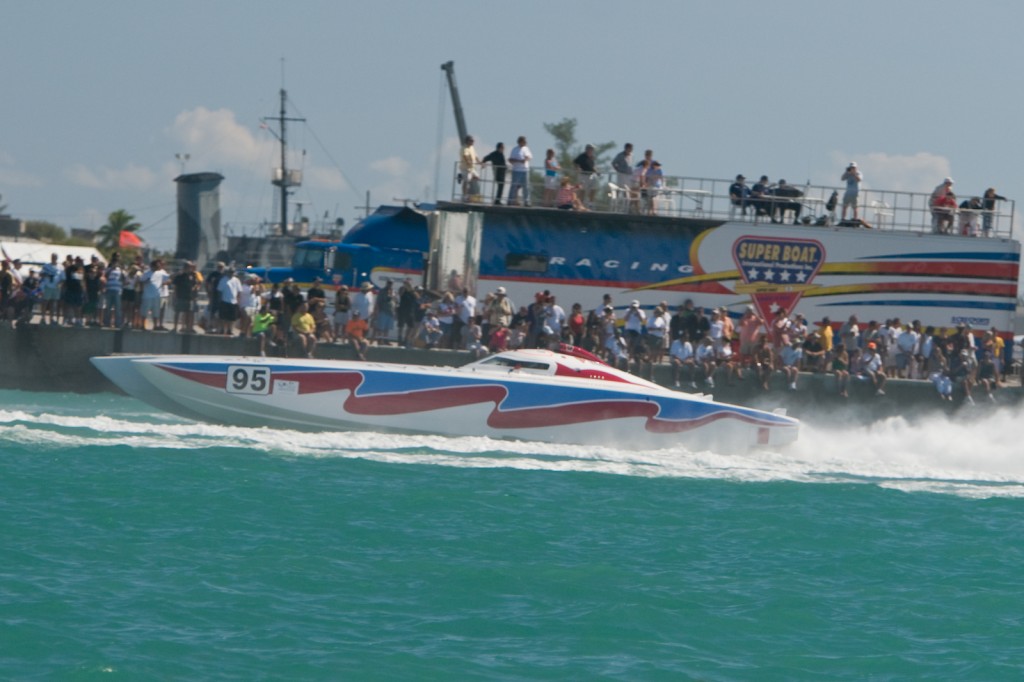