Key West, (January 15, 2010) – Super Boat International (SBI) is excited to announce the first Kilo World Speed Record for the 2010 season will be held July 2nd in Sarasota, Florida. The Suncoast Offshore Grand Prix event attracts tens of thousands of fans and will be a great repeat location for this year’s world speed record attempts.

SBI has chosen the mid-year date to allow teams more time for preparation and testing for this year’s competition. One new boat, Copeland’s 56’ Phenomenon, has successfully started water testing and appears to be on track for the mid-season kilo record attempt. Al Copeland Jr. is living out his father’s wish to be the fastest boat on the water. His [Copeland Jr.] first goal is to beat the propeller speed record of 220 miles per hour, set by Miss Budweiser.

The Superboat season is getting off to a very quick start. While competition in cool weather is best for engine performance and setting records, SBI believes moving the original January speed event to July will allow more time for teams to test and prepare their boats for record setting attempts.

The current Unlimited Class kilo world speed record holder is Dave Scott and the 36’ Bacardi Silver Skater with a record of 198.05 mph and a one-way top speed of 202.905 miles per hour set in 1993.

All Superboats of various length and horsepower are welcome at this year’s SBI Kilo World Speed Record event. 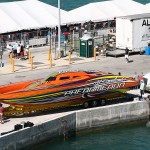