Edwards Closes the Show in Style in Montreal 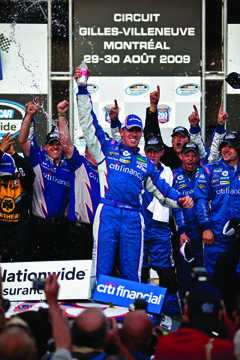 MONTREAL, Quebec, Canada (August 30, 2009) – Carl Edwards and the No. 60 CitiFinancial team dazzled the racing world with an unbelievable last lap pass for the lead in the last corner of the Nationwide Series NAPA Auto Parts 200 at Circuit Gilles Villeneuve. For the second year in a row the race became a rain soaked quagmire with just 13 laps to go. NASCAR ordered the cars to pit road then red-flagged the race while crews installed wiper blades, rain tires and brake lights. Edwards mounted a furious attack on a green-white-checkered restart to close the show and steal the race from standout road-course ace Marcos Ambrose. Edwards captured his third win of the season and his first road- course win at any NASCAR sanctioned event.

4 Design Trends That Will Help You Stand Out On Social Media This Year
May 11, 2022

TikTok’s Revenue Is More Than Twitter And Snapchat Combined—And Other Small Business Tech This Week
April 27, 2022

Small Business Tips To Succeed On Facebook: Know Your Audience, Commit Resources, And Be Genuine
April 13, 2022
Go to Top