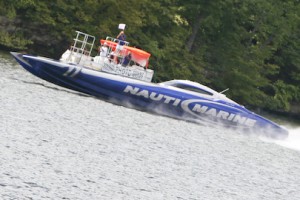 EDWARDSVILLE, IL, (September 1, 2009) – Dave Scott, long-time champion on the offshore racing circuit competed in the 2009 Captain Ron’s Shootout and posted the winning speed of 196 miles per hour. The 50-foot Mystic debuting a new NAUTI-MARINE paint scheme, slightly different from the previous Bud-Light days of last year, excited the estimated 70,000-person crowd during this past Shootout weekend.

“Captain Ron did it again. The crowd was unbelievable this year and the number of competitors was awesome”, quotes Dave Scott (Owner Nauti-Marine). “ We had a really good weekend here. We’ve worked very hard all season to get to this point. Even though, after a little disappointing run on Saturday, I knew we could come back Sunday and post a good number.” Scott’s Nauti-Marine team worked through the night to make minor repairs to one motor that was damaged during the first day of competition.

Scott continues, “the team worked until 4:30 a.m. getting ready for Sunday and I just wanted to put in the same effort as the crew when it was our turn at the starting grid. Johnny [Tomlinson – throttleman] did a great job making sure we were right at the 30 mile per hour speed limit in the box before the green.  Once we took the green, I had it lined up right for the end of the bluff. I know a couple guys missed the entire speed trap at the end and I wanted to make sure that we were going to hit it.”

The 50-Mystic bobbled slightly in the last few hundred-yards of the run, but was not enough to alter a great run. “Right at the end of the run I know I scrubbed some speed, but we just had to stay on line and get the most out of it,” exclaims Scott. Johnny pulled off the sticks after the speed trap and he said he saw mid-190’s on the GPS. I knew at that point we had it. Then, I knew we had to grab a fire extinguisher and put out a small alcohol fire. Except for a few more bugs to work out, everything was great this weekend.” Scott continued, “Everyone asks could we have gone faster and my answer was yes, the motors are great and have the ability to go even faster.”