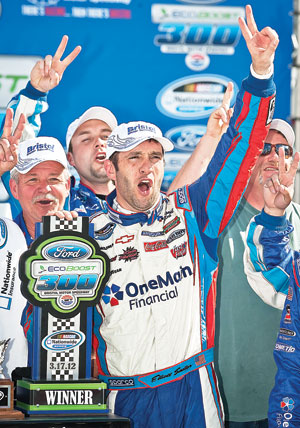 One Main Financial Racing, Cox Group Client, earned another win in the Nationwide Series over the weekend with Elliott Sadler behind the wheel. 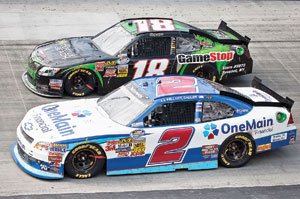 BRISTOL – Elliott Sadler got out ahead of the pack and it was clear sailing to the checkered flag.

Sadler took advantage of a caution involving Kyle Busch and won the battle off of pit road to take the Ford EcoBoost 300 at Bristol Motor Speedway.

The race was controlled by reigning Nationwide Series champion Ricky Stenhouse Jr., who passed local favorite Knoxville-native Trevor Bayne on lap 223. Stenhouse pushed through lapped traffic and had a two-second advantage over Sadler and Brad Keselowski before Busch scraped the wall and prompted a late round of two-tire stops.

Sadler got out first and eased past Kasey Kahne when the green flag dropped. There was nobody close from that point forward.

“I thought with new tires, they were going to be able to go,” said Sadler, who has multiple wins for the first time since 1998. “Kasey Kahne got a great start and got his momentum up keeping everybody to the bottom. I knew if he was behind us, he would be able to hold everybody back.

“This car was so fast at the end of the race. I knew once we got clean air we would be in good shape.”